This Year We Made History… Next Year We Shape The Future! As our SMW New York colleague Nicky Yates declared in her blog post “Welcome Back: The Future of Now” Social Media Week is built on the belief that we should better understand how technology is providing new inspiration for how we live, work and create. In a little over ﬁve years Social Media Week has built a dynamic platform for communities across the globe to discuss how social media and communications technologies are impacting lives on a local level. In 2013 our team had the pleasure (and challenge) of widening the lens to include for the very ﬁrst time an African city, our city – Lagos, Nigeria.

It was with a generous helping of pride, much sweat and no small amount of ambition we, as the kids say on Twitter, “did that!”. By all accounts SMW Lagos 2013 was a success. With the support of our sponsors and the help of 83 independent event partners we examined a wide range of issues affecting business, government, media, entertainment, sports, civil society, technology, and even religion. Twice during the week SMW Lagos became the number one trending topic in Nigeria with over 33,000 ofﬁcials, celebrities and everyday folks chiming in on the events impact thus solidifying Social Media Week Lagos as Africa’s largest social media gathering. In short, #WEMADEHISTORY. 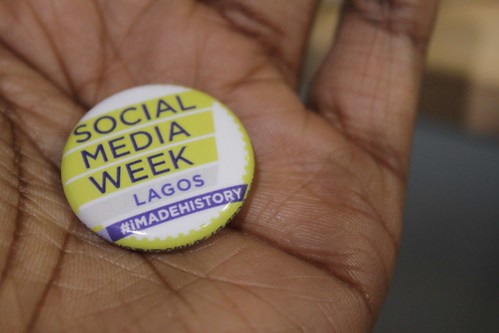 “Social Media Week Lagos is a powerful tool to showcase to the world that Africa is not only a part of the conversation but leading it.” Marcus Glover, co-founder of Glu Agency and SMW Lagos advisory board member.

Tech incubators are springing up across Lagos and from Tunis to Cape Town. As of 2013, Africa has become the world’s fastest growing mobile phone market with subscribers demanding better access to more web platforms that cater to the mobile user. Africa’s Telecoms are spearheading innovations that will be key to making Internet available to the population at large. All across the continent content creators, software developers, geeks, and venture capitalists are joining hands -and bumping heads – to solve problems and lay the framework for a future of 1 billion people connected.

We believe passionately that the future of digital, social and economic growth inevitably belongs to Africa. This belief is what inspires our local theme for 2014: A Connected Africa Is The Future.

As much as we relish in patting Lagos on the back for a job well done in 2013 we know that much like the world of IT, the real measure of our success is determined by our future. So what does the future for Social Media Week Lagos look like? Quite simply, bigger, bolder, better and more connected.

For 2014 we’re introducing a new and improved hub format, curated programming, engaging local content, workshops and masterclasses with Nigeria’s brightest minds. Locally we’re participating in the SMW global Gender 50/50 campaign designed to promote diversity and ensure the voices and ideas of African women in tech and social media are being included. We’ve welcomed back and added to our list of incredible SMW Lagos Bloggers. In addition we’re reaching out to both the Nigerian design and developer communities with our 2014 T-Shirt Design Challenge and APPsolutely LAGOS, an app building contests which begins next month.

If that’s not enough, Social Media Week Lagos 2014 is getting international! In the spirit of our 2014 theme, we’ve launched 55 FORWARD a groundbreaking initiative inviting business, tech, entertainment and media leaders from each of Africa’s fifty-five countries to participate during the Social Media Week Lagos conference. It’s our belief that 55 FORWARD will spark collaboration, encourage ideas and lend a deeper, more impactful perspective to our theme.

As the epicenter of innovation for the African continent Lagos, your future is looking pretty bright!  For 2014 we’re proud to once again be the stage on which our city -and continents- most influential thought leaders, brands, agencies, startups and digital change makers share best practices, ideas and inspiration.

This Year We Made History… And Next Year We Shape The Future!

Social Media Week Lagos will be held February 17- 21, 2014 in Lagos, Nigeria. If you’d like to sponsor programming, submit an event, nominate a speaker or 55 FORWARD Ambassador or otherwise be involved check out  Get Involved.